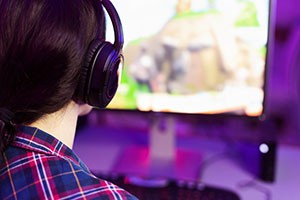 Gateway Technical College will be one of two technical colleges in Wisconsin to offer esports, providing a way for students to engage in structured video gaming competitions and meet and interact with others who also enjoy this popular event.

College officials made the announcement during the college’s Board of Trustees meeting Dec. 19 in Burlington that the new esports student club would start in January for the Spring 2020 semester.

Eric Doherty, Gateway’s director of IT-User Experience who will serve as the club’s adviser, said the college formed the group in response to student interest. The group will form as a club and, from that group of students, a team will be created to represent the college and compete against other college and high school teams.

“We’ve heard from so many students that they would be interested in an esports club,” says Doherty. “Students will play video games, but it’s much more than that. There’s a lot of responsibilities students will take on as part of the club. They’ll learn teamwork, problem solving, IT and computer skills, marketing to name a few.”

While relatively new, colleges across the nation increasingly have formed esports teams. Currently, six colleges in Wisconsin have competitive esports teams with three more announcing they will begin in Spring 2020. Of those, one is a technical college.

Doherty points out that at least 15 area high schools have competitive esports teams, so it’s natural for the college to offer similar teams to meet the interest of students who transfer out of high school and into Gateway.

“There’s a lot of interest in this,” Doherty said. “And it’s more than just playing video games. It’s a competitive atmosphere, which develops leadership and team-building skills, as well.”

Doherty said the initial roster of games will include League of Legends, Overwatch, Rocket League and Super Smash Brothers Ultimate and, from that lineup, club members will decide which game to compete in.

Doherty pointed out that esports is more than just a niche demand. Four-year colleges give out scholarships and recruit players, esports educational training programs have been created by colleges nationally and the November 2018 League of Legends championship drew 99.6 million online viewers – more than the 98.2 million who watched the Super Bowl on television three months later, the highest TV viewership rating among all sporting events.