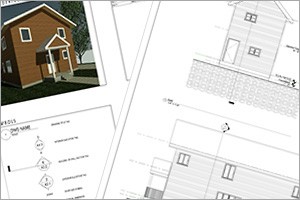 Students in Gateway instructor Bob Kaebisch’s fourth-semester design class were tasked with providing plans for two Habitat for Humanity homes to be built in Kenosha. The group, which advocates for affordable homeownership and develops housing in areas where new homes are needed for families across the globe, was seeking to update its home plans for a Kenosha neighborhood.

“We were very excited to be able to work with Gateway and the students on this effort,” said Habitat for Humanity of Kenosha Executive Director Angela Elliott. “The students impressed us with their plans and their ability to develop these homes.

“These plans were able to meet the expectations and needs of the homeowners and Habitat for Humanity. It was a great success and we look forward to working with Gateway students in the future.”

Plans were needed for one four-bedroom house and one five-bedroom house, both of which included other requirements, such as a maximum of 1,500 square feet, two stories and two-and-a-half bathrooms each. Further, the house plans had to fit the overall housing theme of the neighborhood, which gave students real-world experience, said Kaebisch.

“I can give them the general requirements for a class project, but they are essentially making up a house of their own design. With this project, they had an actual client they had to work with and meet specific requirements,” said Kaebisch.

“I think that those starting out in the field think that restrictions will hurt their design – but this is the real world. Clients will have restrictions, a budget, environmental implications, neighborhood concerns. Doing the Habitat for Humanity work caused them to be very tight in their design, which is realistic.

“It’s harder for them, but it’s a real design that will actually be used. It’s been very exciting.”

Holtman said designing the house with an actual family in mind helped to make the work even more realistic.

“I think this will help me to understand the overall picture. When I designed it, I had to think about the fact that actual people would be using this house. I had to keep in mind that a family of five would be in there, try to design it so they each had enough space without feeling cramped,” said Holtman.

Kaebisch said work with Habitat also provides that extra link for students to see the benefits of working to help their community.

“I think some people believe that Habitat is giving someone a free house. That’s not what it is. It’s deserving people who might be struggling to get into their first house. They pay for the house, they help build the house, and they live in the house. Not only does it help students to build that real-world experience, but it also helps those deserving families to get their own home and improve their lives, the community and their neighborhood, and the students see that, too.”