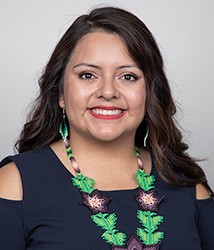 September 24 was a homecoming of sorts for Zaida Hernandez-Irisson – except that she really never left home.

Gateway Technical College’s newest board of trustees member was sworn in Tuesday, marking a full-circle story for the Racine engineer. In the past decade, she’s earned two degrees from the college, successfully entered her career and represented and shared the Gateway story to area communities, the state of Wisconsin and even the nation.

Now, she’ll serve on the board of trustees to help mold and shape its future with a foundation forged as a student and now career professional.

"Zaida is highly qualified to serve in a trustee leadership role for Gateway, having firsthand experience as a graduate from both the Cosmetology and Engineering programs,” said Gateway Technical College President and CEO Bryan Albrecht. “Her knowledge and experience will enhance the future direction and provide a student perspective on critical issue facing college students today.”

Hernandez-Irisson called the moment she realized she was a board member “surreal” and extremely rewarding.

“It’s a very surreal moment that, as I tour the Kenosha Campus, I remember the first time I began as an English as a Second Language student – and now I am walking those same hallways as a member of the board of trustees,” says Hernandez-Irisson.

“Being able to serve the college that helped me to get a start on my career is very rewarding for me, knowing that I get to give back to the community that saw me go through middle school, high school, college, off to a four-year college and into my career. I get to come back with all of those skills and now I get to serve on the board.”

Hernandez-Irisson was 11 years old when her family moved to Kenosha. At the time, her father was the only one who spoke even a little bit of English. She began her educational journey at Gateway by enrolling in the college’s English as a Second Language program to learn English. She knew she needed the English skills to succeed at school at first, then college and work. She excelled in the program.

Hernandez-Irisson first earned her Barber/Cosmetologist technical diploma in 2012 and entered that career field. Even so, her sights were firmly set on her lifelong dream of becoming an engineer. She used the money she earned as a barber-cosmetologist to pay for her Gateway engineering degree.

Along the way, she honed her public speaking skills as a member of the Society for Women Engineers and as Gateway’s 2015-16 District Star Ambassador. In that role, Hernandez-Irisson was the student voice to the communities of Kenosha, Racine and Walworth counties through speaking engagements and other public events.

“I gained self-confidence in being more comfortable around speaking in front of others and saw the impact my story was having on other students, how it motivated them,” she said.

The student who didn’t speak much English 16 years ago is now an accomplished and poised public speaker, illustrated through the many public speaking engagements and the interviews she’s done with members of the media.

Hernandez-Irisson earned an associate degree in Electrical Engineering Technology, a Barber/Cosmetologist technical diploma and an EET Concentration in Biomedical Engineering from Gateway.

“I find Zaida's journey to be very inspirational to all of us,” said Engineering instructor Pat Hoppe, who was Hernandez-Irisson’s instructor and mentor. “She is a shining example of how the technical college system can help people achieve their goals throughout their educational journey.

“Zaida's hard work and perseverance has enabled her to achieve every goal she has set for herself. I am very proud of her.”

Hernandez-Irisson’s other goals were to enter the workforce as an engineer and earn a bachelor’s degree.

Hernandez-Irisson currently serves as an electrical engineer for a Racine high-speed spindle manufacturer and has completed her engineering degree from the Milwaukee School of Engineering. Her work at Fisher USA focuses on wire harness development, which ensures communications from sensors in the spindles to the drive controlling it. The most common application is where spindles are used in manufacturing in computer numeric control machining.

Hernandez-Irisson also held a goal of becoming a board of trustee member, but said the opportunity to do so presented itself much earlier than she had expected.

“I’m a planner. I have a five-year goal and this wasn’t in that plan. However, I’m a strong believer in that things happen for a reason, and when this position came across, I knew I had to apply.”

Earlier this year, NBC News Learn featured Hernandez-Irisson in a video collaboration for her work as a female engineer and her efforts to mentor teenage girls in her community, specifically to become engineers.

“Zaida not only serves as an ambassador for our college but a role model for those seeking career success,” says Albrecht. “Her determination to excel both at Gateway and MSOE have positioned her for this new leadership role as a trustee for Gateway Technical College.”