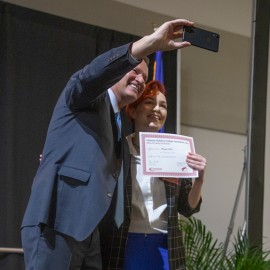 The Gateway family and community helped me to get through some tough times as a student and through the pandemic. They were there to give me that extra push during the hard times and I will always remember that.

My, oh, my, how that’s all changed in two years.

Megan has transformed from being hesitant about enrolling in college to becoming an advocate and voice for the technical college student. She’s become a face of Gateway to its communities, to the state technical college system and even to the nation.

Megan says it all began with something relatively simple, but particularly powerful: Someone at the college reached out to her and encouraged her to become part of Gateway.

“I love the family atmosphere and community Gateway has,” says Megan. “I had no clue what was going on at Gateway, and someone came up to me and said ‘join us,’ and I did. Actually, everyone in the room came up and talked to me.

“That’s what kept me coming back. The Gateway family and community helped me to get through some tough times as a student and through the pandemic. They were there to give me that extra push during the hard times and I will always remember that.”

Megan continued to become more and more involved at Gateway. She was selected as Gateway’s 2020 District Ambassador, a position that’s considered the voice of the Gateway student, before being named as a student representative on the Gateway Board of Trustees.

In March of 2020, she gained national recognition for being named into the Newman Civic Fellowship, made up of students selected for being leaders on their campuses who demonstrate a commitment to finding solutions for challenges facing communities locally, nationally and internationally. Megan was also selected to the Wisconsin Technical College System Board as its student member, a full-voting position which makes decisions that affect students statewide. Megan was also named as a Student Responder for the 2022 Commencement ceremonies.

Megan loved the family atmosphere and support so much that it was through that she figured out her future career. She wants to encourage students to succeed in their educational journey and support them much like she says she was supported during her Gateway education.

“My high school years weren’t the best for me and I took a gap year to volunteer,” says Megan. “My parents then encouraged me to go to Gateway. They knew of so many people who went to Gateway and liked it, they say to try it out.

“I didn’t know how I was going to do this, whether I was going to be successful. I thought about staying a semester and moving on to a four-year college. But then I started to become involved. And then I realized I was better off staying here – and fell in love with the Gateway family.”

Megan chose Professional Communications as her program because she believed it would help her in many ways for the next step in her career and education.

Megan also says she likes Gateway because it’s a CliftonStrengths-based college. “As a student prior to Gateway, I was also told about the weaknesses I had. When I found out my Strengths at Gateway, the college encouraged me to build on them. That helped me to become a better student and helped me to build my confidence.”