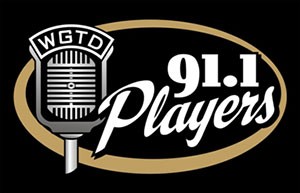 The WGTD Radio Theater, now in its 15th season of live original radio theater broadcasts, has once again been recognized by the Wisconsin Broadcasters Association by winning three WBA Awards for Excellence.

And, for the first time, the radio theater has been recognized by the national Hear Now: The Audio Fiction and Arts Festival, winning two Silver Medals.

The national HEAR Now event is the audio equivalent of an international film festival for contemporary audio storytelling in all its forms, including live and scripted solo performances. The two Silver Medal Awards were for The WGTD Radio Theater’s 14th Season “World War II Theme,” and “The Kane Shadow: Sayonara, My Friends,” the story of WWII Japanese-Americans in Delavan. These two awards were presented in Kansas City on June 9.

The three awards from the Wisconsin Broadcasters Association included two first place Awards for Excellence and one second place award.

The second place WBA Award was for:

These shows, all in front of a live studio audience, were:

In addition to being aired over WGTD, programs were also streamed live online at WGTD.org.