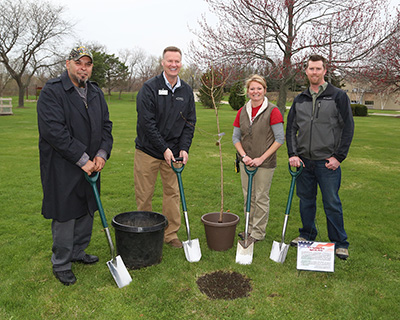 Gateway Technical College’s annual Celebrate Earth Day event this year became a symbol of more than just the day itself, which focuses on promoting and encouraging environmental stewardship. This year, it also came to represent overcoming hardship, loss and honoring those who serve us in the military and emergency and protective services.

The college planted a Survivor Tree at its Kenosha Campus Pike Creek Arboretum during a ceremony, providing a living reminder of the country’s resilience, survival and rebirth in the wake of the terrorist attacks of Sept. 11, 2001.

“This project has been incredibly inspiring for our college and community, and fitting that we were able to obtain it in time to plant at our Celebrate Earth Day event,” said Gateway President and CEO Bryan Albrecht.

The ornamental pear tree is a descendent of a tree found at Ground Zero following the attacks, severely damaged yet alive. It was recovered and rehabilitated and returned to the 911 Memorial in 2010.

Each year, the 9/11 Memorial Foundation gives seedlings from the survivor tree to three communities that have endured tragedy or are part of the special memorial tribute, such as Gateway’s HERO Center monument in Burlington. The monument features an I-beam salvaged from the wreckage of the attacks.

More than a thousand enjoyed the Celebrate Earth Day activities and events held at Gateway’s Kenosha and Elkhorn campuses. The events featured many earth-friendly activities, informational booths, workshops and children’s crafts across the campus.