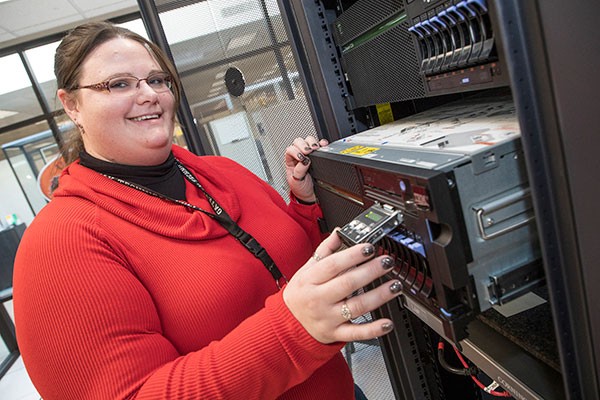 “I chose to stay at Gateway, and that was the biggest thing that has defined my career. I would not be in IBM i or as far along in my career without Gateway..”

Marina Schwenk was once a fresh-faced student at Gateway Technical College, working to achieve her goal of being an information technology industry professional.

Only a few short years after earning a Gateway IT Software Developer degree, Marina’s already an accomplished member of her career field, prompting her to be selected as a national 2019 Fresh Face of IBM along with seven other young professionals from across the country who are rising stars in their industry.

While she’s also earned a bachelor’s degree, her roots at Gateway still run strong and deep for the software developer at a regional specialty lighting manufacturer.

“My Gateway degree started my career,” says Marina. “It enabled me to hit the ground running. I knew if I didn’t have that degree, I wouldn’t be where I am today.

“I graduated Gateway when I was 23. I’m 28 and working in a great career on a great career path with room to grow. I am so appreciative that I was able to earn that degree.”

In addition to her work as a developer, Marina has also co-authored two open-source projects – and is working on a third – built in native RPGLE running on IBM i. She also speaks at conferences with four of her own breakout sessions and as a panelist on IBM i topics, and holds all three of the IBM i community badges. These badges are awarded to those recognize community members who contribute regularly to the success and vitality of the IBM i community and everyone within it.

She’s returned to Gateway to tutor and mentor others in IT, and says the college still has what drew her to enroll there in the first place.

“Gateway was one of only a few colleges that teach the IBM i platform. I almost left Gateway, but did some research first and realized that Gateway had the best reputation, as far as education, with industry leaders and the ability to transfer to a four-year college if I decided to continue.

“I chose to stay at Gateway, and that was the biggest thing that has defined my career. I would not be in IBM i or as far along in my career without Gateway. They’ve been a huge help.”

Marina was involved in Gateway student IT clubs, which further helped her gain leadership and further honed her skills through student-led computer workshops and helping to coordinate a large computer users conference.

Transfer agreements forged between Gateway and four-year colleges helped, too -- all of the credits she earned at Gateway transferred to Bellevue College, saving her time and money in earning that degree.

“I was so happy that the transfer agreement was in place. I know Gateway has worked hard to expand those opportunities. It helped me with the cost. I believe my entire four-year degree cost about $20,000, which easily could have been twice that amount without Gateway.”

Marina also sits on a national board focused on discussing IBM i best practices.

If you, too, believe Gateway could help define your career path like Marina’s, go to gtc.edu/enroll to get started.