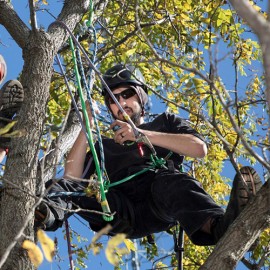 The people who teach at Gateway are passionate, and that was really important for me.

It’s a climb that’s well known to his family, friends – and the nation.

After learning how to climb trees during his coursework in the college’s Arboriculture/Urban Forestry Technician program and joining a climbing group that sought out big trees to climb, Mack became a “face” of a national Facebook campaign urging users to form their own small groups through the social media platform.

He was still a Gateway student when the company flew him out to Los Angeles for a photo shoot that resulted in his image being seen online and in many states, including billboards in Times Square in New York.

“That’s how this program has been for me,” says Mack. “Here is my passion, and here is a place where I can put it – and now it has a life of its own. I love what I’m doing.”

Mack started his Gateway education as he sought a change from his career in manufacturing.

“I was looking for something positive, something where I could affect the environment around me. I want to make a tangible difference.

“The people who teach at Gateway are passionate, and that was really important for me. I came from a background of get the paycheck, go to the bar, rinse, repeat, do that for 30 years, then retire. I needed something with meaning, and they showed me meaning. It helped me to develop into who I am becoming.”

Mack says the program gave him authentic, real-world training and skills, fueled by hands-on learning, instructors who know the industry well and a strong interaction with professionals already in the field.

“In addition to the instructors, there were a lot of industry professionals we were able to work with. We were able to form those relationships while we were students, which helped prepare us for the working world and we made those connections before we even graduated.”

Mack did graduate and was quickly hired on at an area tree service company and is involved in all aspects of tree health. He says he’s in a career he knows will continue to grow in future.

“You have to be able to support your family, and there is a lot of demand for arborists right now,” says Mack. “It’s an industry that’s hiring and you can pick the  jobs you want if you have the education. The need for qualified arborists is almost overwhelming.”