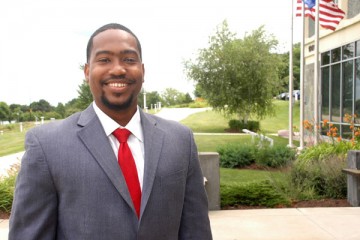 So many people who were near and dear to me were either faculty there or were students there. Gateway was a local college, too, so it was an easy decision.

LaShon Stevens was 23 years old, worked hard at his job and knew his work history and skills made him very employable.

Even so, he found himself on the job hunt for months after a layoff that had sidelined him and his coworkers alike.

He knew he had to take a different path to succeed and knew he needed more training and education. LaShon chose Gateway Technical College as the vehicle to his success -- as well as discovering his true career passion.

“I knew from experience that Gateway was a well-rounded college where you could get a great education and offered a great balance between learning on-campus as well as learning online,” said LaShon.

“I had taken some classes there before, so many people who were near and dear to me were either faculty there or were students there. Gateway was a local college, too, so it was an easy decision.”

That decision resulted in the Spring 2020 graduate already starting up his own realty company with hopes of doing even more.

LaShon began at Gateway in the Facilities Maintenance program because it was an area he was familiar with and something he enjoyed, and he earned a technical diploma in that program two years later in 2017.

A few classes into his college education, LaShon realized what he really wanted – to open his own business. A few classes later, his vision became more clear: He wanted his business to provide hope in Racine.

LaShon earned his Business Management associate degree in Spring 2020 and looks forward to his career – and helping others.

“I realized while I was in the Facilities Maintenance program that my real passion was to rehab houses and open my own business to do that, as well as property maintenance,” says LaShon.

“This has morphed a few times over the years. I have a passion for people and believe rehabbing homes will help others. My ultimate goal is to help others to re-enter the community by working side-by-side with them to rehab their own home.”

LaShon has started his first business in real estate but hopes to move on from there into the rehab field.