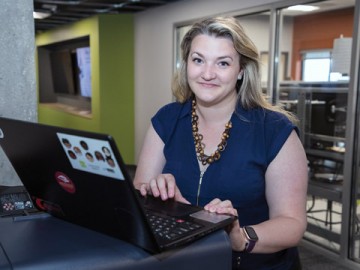 I feel confident in the skills I’ve learned at Gateway, and those will help me in my career.

Need for a career shift leads graduate to Gateway

Emily Rindt’s education and career path took her in one direction until she realized she needed a change.

She’d earned a theater arts degree from an area four-year college and started in a career field where she eventually realized she couldn’t support herself. Simply put, she was burned out.

Emily knew she had to try something different, even if that meant going back to college.

That “different” — and difference-maker — was Gateway Technical College.

Fewer than two years after enrolling in the Information Technology-Software Developer program at Gateway, Emily graduated and has already begun a career she feels happy about and sees herself working in for many years to come.

“I feel it was a good decision to enroll at Gateway and to change my career,” says Emily. “I am more confident and more in control of my life and my career. Things are snowballing in a great way.

“There’s just such a positivity to my life.”

Emily says she decided on IT as a career path after a heart-to-heart conversation with her best friend. Time and time again when they discussed Emily’s strengths and what she would enjoy in a career, they came back to information technology.

She says it was one of the best decisions she’s made.

“It’s come naturally to me,” says Emily. “I completed the degree in 18 months with a 4.0 GPA. I think that showed me that this was the right choice.”

Emily says she likes IT because it allows her to be a problem solver -- but also think outside the box. “It’s a nice balance of science and creativity.”

In addition to the solid instructors at the college, Emily says she also believes Gateway provides great resources for its students.

“Gateway offered so much more support to students than the other colleges I’ve been to. Advisers, instructors, support staff, there’s so much clearly offered to students here.

“I feel confident in the skills I’ve learned at Gateway, and those will help me in my career.”