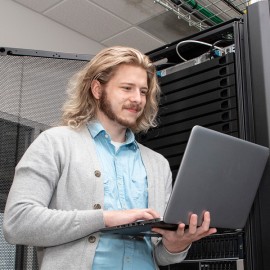 I realized I couldn’t do it without a degree.

Grad turns to Gateway to better his work life

While the money was good, he was working long hours with no two days off in a row, no real chance to take vacation days and he didn’t really enjoy the work. So, he tried another job – and it was a repeat of the first.

What he wished for was something more stable, more long-term, something he enjoyed doing and a position that would provide him with a great work-life balance. He knew he had to obtain a college degree to do that – and he knew the place to obtain it was Gateway.

“I realized I couldn’t do it without a degree,” says Alex. “My job was killing me. I needed to do something else.”

Today he says he knew he made the right decision. He’s in a job he likes, in a field he looks forward to working in and one that allows him some great benefits. He said the cause-and-effect of it all began at Gateway and the training he received in the college’s IT-Data Analytics Specialist associate degree program.

Handshake is Gateway’s premiere job and internship platform that connects employers and students.

Alex says he went to an area four-year college right out of high school, but realized that wasn’t right for him. After working for a few years, he chose Gateway and says Data Analytics has been a “perfect fit” for him.

“I took a look at the various programs offered at Gateway, and the more I read about it, the more I realized Data Analytics was my calling,” says Alex. “I already am an analytical thinker and like to piece things together using various data.

“I said, ‘yep, that’s spot on. If I can do that as a job, to solve problems using data, that’s the right track for me, and the program will help me to get where I want to get in life.’”

Alex says Gateway instructors helped him to realize his goals and were always there to answer questions or provide guidance to him.

“Every instructor I’ve had at Gateway has been incredibly helpful. Especially in the program, they are everything you would want in an educator. Someone to talk to like a human being, when you have those moments of ‘what’s going on here?’ and have an adult with that empathy and knowledge help you. That’s how they do things at Gateway.”

Alex says he was also helped by the distance learning setup at Gateway.

“I think the biggest thing that helped me with my learning was remote learning. I’m glad Gateway offered that. I didn’t have to drive to campus, and I think it helped me to stay focused on my classes. It was the WiFi, me, my computer and my class. I know COVID forced that, but in the end it was beneficial for me.”

Alex said his initial foray into college, at a four-year college, didn’t go well. He said he wasn’t given much guidance and questioned the need to take so many elective courses that didn’t apply to his program. He said he was upset that high school officials didn’t promote Gateway as a viable college option to him when he was in high school – but also notes that the new program wouldn’t have been available at that point, too.

In the end, it’s all worked out well for Alex.