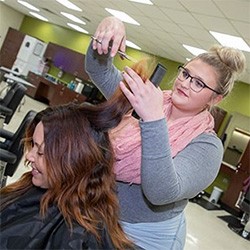 I will be 20 years old, I will have earned two degrees in careers I love, I am employed in a career I love and I hope to one day own my own shop. All of this was possible because of the Promise and Gateway.

Stevi Sterling began working in a salon when she was 15. She liked the atmosphere and knew right then she wanted to do it for a living.

Stevi initially thought she would be unable to follow that dream right out of high school – until Gateway Technical College and the P­­romise changed all that.

Stevi enrolled at Gateway, earned her Cosmetology degree, entered her career and is now pursuing a second degree, in Business.

“I will be 20 years old, I will have earned two degrees in careers I love, I am employed in a career I love and I hope to one day own my own shop. All of this was possible because of the Promise and Gateway,” says Stevi.

The promise of a Promise

Stevi said one of the reasons she chose Gateway is because she qualified for its Promise program. She didn’t believe she could start college right after high school, but the Promise allowed her to do so.

“When I realized I had received the Promise, I realized how helpful it really is because of what it can cover, financially. I was able to go to college.

“Financial Aid covers only so much. You still have to pay the remainder of the tuition, plus books and fees.  Where would I have gotten that? I received it from the Promise.

“I think also think what makes the Promise so important is that it helps students right out of high school. I really feel that the longer you wait to go to college, the less likely you are to do it.

“It’s life-changing for many people. It changed my life by allowing me to go to college right after high school.”

I think [Gateway]’s small enough that you can get that one-on-one help you need, guidance you need. … You learn the technical skills .. but … also ... how to work with clients.

Readied me for my career

Stevi says another reason she chose Gateway is word of mouth. She knew several people in the industry who had graduated from Gateway, and they had good experiences. She also knew an instructor. “Everyone liked the college and the program. There were a lot of familiar faces for me.”

Gateway’s nearness to her home and helpful staff guiding her through the paperwork and other tasks necessary to enroll and complete a degree also helped Stevi succeed, she says.

“Also, the ability to work with people one-on-one is really important to me, and you get that here at Gateway. Gateway isn’t really small, but I think it’s small enough that you can get that one-on-one help you need, guidance you need. Gateway has it all.”

Stevi also voiced great respect for the instructors, who prepared her well for her career and set up a framework where students learned the soft skills of handling and working with customers from all walks of life. The college has three salons where the public can come in and receive haircuts and other cosmetology services for free or very inexpensively.

“You learn the technical skills in working with hair, but you also learn how to work with clients. That’s really important.”