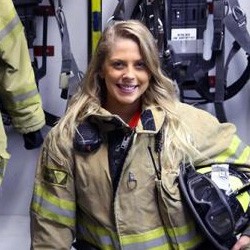 It’s a great place to get that hands-on training for your career … that practical experience working with an emergency service. You were able to read about it — and then actually do it, with a patient in front of you.

Youth Options helps grad decide her career – and then enter it

A pager, a patient, a permit and a purpose to her education instilled through Gateway Technical College helped Sharlea Baumeister realize exactly what she wanted her future to look like.

The high school student, who took Gateway emergency medical technician classes while a senior at Burlington High School through the Youth Options program, was an EMT before she even graduated.  One year after that, she graduated from Gateway’s program and became a paramedic.

The skills she gained at the college she put to work immediately – she’s already been hired on by an area fire department.

“I fell in love with this career on the first call I responded to,” says Sharlea. “I was working with patients relatively early and went on a lot of calls through the Gateway program. I learned so much at Gateway and I got so much experience, even before I left high school.”

Sharlea had decided she wanted to enter the health career, but she was unsure exactly what specific part of it fit her interests best. Her high school teacher suggested enrolling in the Youth Options program. Sharlea thought it would be a great way for her to decide her career. It offered hands-on learning and the ability to work with an actual emergency services crew.

“All those puzzle pieces that were sort of scattered all around came together to make a clear picture for me. I knew what I wanted to do with my life.”

Sharlea responded to several calls during her senior year at the high school.

“I was able to wear a pager and we would have shifts where we were on call with Burlington Rescue. If we were called, we would meet them at the station, or even at the scene. We were able to work with the patients, take their vital signs and such.

“My friends all thought it was pretty cool that I would be running out of the school in the middle of the day to help people. That happened a lot.”

The training and number of actual emergency calls Sharlea had the opportunity to respond to allowed her to further hone what she learned in the classroom and gave her a head start on her EMT training once she graduated from high school.

“I really liked it. I liked the interaction, the hands-on learning and the fact that we were really involved with Burlington Rescue.”

Sharlea says the structure of education at Gateway, combined with strong instructors, gives students a great opportunity to succeed and enter the field with the skills to do well.

“Gateway prepared me well,” says Sharlea. “It’s a great place to get that hands-on training for your career. Because you also had that practical experience working with an emergency service, you were able to read about it – and then actually do it, with a patient in front of you.

“This is a foundation I’m able to build on in my future.”