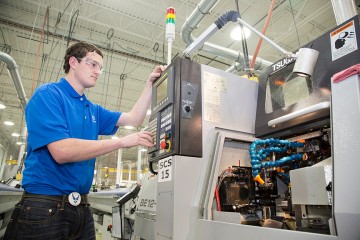 I’m able to transfer what I do in class to work.

His results? Kyle will swim into his career at a time when many of his classmates will be just starting to figure out what they want to do with their own future. He will also do so more inexpensively compared to those at a four-year college and be trained for an extremely in-demand career field in Southeastern Wisconsin.

The accomplished Elkhorn High School student-athlete decided as a sophomore he wanted a hands-on career and began the very next year in a CNC apprenticeship at the Elkhorn-based Precision Plus.

In between competing at the state high school swimming meet in the 100 yard freestyle, Kyle continued his CNC training at Precision Plus. After graduating high school, he enrolled at Gateway, where he says he’s receiving a quality education close to home.

“I like the instructors at Gateway, they are very knowledgeable about what is going on in the industry, and what we need to know to be successful,” says Kyle.

“At Gateway, you know your instructors, there is a lot of one-on-one teaching. You get the time to talk to them. It’s not like some other colleges, where you are in a huge lecture hall and are one of many students. They know you here, and work with you.”

Kyle says training is realistic and he uses the skills he learns at Gateway at his position with Precision Plus.

“I’m able to transfer what I do in class to work,” he says. “Everything from gauging to blueprints, operating, setup – that all transfers to the CNC field.

“The instructors steer you toward those skills you need to succeed.”

A year removed from high school, and Kyle is light years ahead of many of his peers. He’s training for an extremely in-demand career field, especially in Walworth County where CNC machinists are sought by many employers. He’s in the field already, applying daily to an actual job what he learns in the classroom.

And, Kyle’s been able to watch as Gateway has planned and is building its new, state-of-the-art manufacturing center on the Elkhorn Campus, which will provide machines and training used by employers today. He will be able to use those machines to train on after the center opens its doors in 2016.

Kyle points out another benefit to being a Gateway CNC student – he’s been in on the actual planning process of the construction of the new center, helping to determine the equipment to be used for classes.

“I like the support Gateway is giving to open this center,” says Kyle. “I realize that getting those machines and the building can be expensive. I think it’s great they are opening this center in Walworth County.”