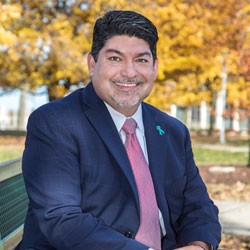 If you want to reach your potential, the best invention in education is the technical college. It’s the place where you can get a great start or restart your career.

It’s a recipe he believes in and has fueled his own success through career and education.

“I knew I had to put myself in those positions of risk, to take a chance, to learn more. Whether it was being uncomfortable in my first English class, to taking my first position at the College of Lake County, to earning my doctoral degree. I knew I had to take those risks to grow.

“What I’ve also learned is that I can see those who encouraged me, who pushed me to do more, who took a chance on me. None of this happens without a supportive family and support system, and that is what’s led me to this point – I want to encourage students to do their best and give themselves the opportunity to grow, especially for students of color.”

Jorge currently serves as Gateway Technical College’s dean of General Studies. To students and colleagues, he’s a leader, encourager, mentor and a powerful example of how opportunity and hard work coupled with taking risks for the right reasons can result in success.

He’s also a champion of higher education and the doors it can open to anyone who seeks a degree.

Born in Mexico as one of six children to Leonor and Fidencio Nieto Sr., Jorge moved back and forth between the United States and Mexico before living in the U.S. permanently beginning in eighth grade. He became proficient in English when he first lived in the United States, but after moving back in Mexico in second grade and speaking primarily Spanish there, his English had regressed.

It was in high school where he experienced his first moment of taking a risk and seeing the great payoff – and it was something he would look back and recount in later years as he took similar risks and experienced similar rewards.

“Because I hadn’t taken English in a while, I was in the bilingual classroom. I noticed a great difference in education between what we were receiving and the rest of the school. I remembered asking myself, ‘Why does it have to be that way?’

“I didn’t feel I was getting the same experience as everyone else if I remained in the ESL classroom. There was a waiver to get into a regular classroom, and my adviser told me all I needed was my mother’s signature … I was able to switch. It was very hard for me at first, very frustrating and challenging. But I eventually was able to do well academically to continue my journey into high school in regular classes.”

Jorge started college in Chicago before leaving to take a job in telecommunications. While there, he also worked for the College of Lake County as a part-time evening clerk, a position that would set the course for the rest of his career. He eventually was hired full time for that college. The position felt right for him, and he earned his associate degree there.

From there, Jorge continued to embrace the opportunities that came his way. He earned his bachelor’s degree at Carthage College in three years while working full time. After earning that degree, Jorge was promoted at Lake County.

At that point, the associate dean position for Gateway’s General Studies program opened. “I had been at CLC for 18 years and it was a huge risk for me to say, ‘I will try this.’ But I saw the impact I could have at Gateway, and I decided to apply.”

He was appointed as associate dean. But his risk would provide another opportunity – Jorge was later appointed dean of General Studies. As dean, Jorge oversees several areas of coursework that include communications, economics, math, natural science, social science and world languages — and the 50 instructors who teach those areas. All Gateway students, no matter their program of study, must take at least a few courses in the areas Jorge oversees.

Jorge believes in the power of education along with taking calculated risks to better yourself and discover your full potential.

“Unless you are OK to accept your limited world, you will always be limited to that same level. There’s nothing wrong with that, but if you want to reach your potential, the best invention in education is the technical college. It’s the place where you can get a great start or restart your career.

“At technical colleges, we are the engine for economic growth, and you can be a part of that engine. Sure, you have to have a level of curiosity, and you might be a little afraid, but without an education, you will remain in the same space.”

Jorge believes in giving back to the community and serves on a local school board, hoping to provide a voice of the Latino community to K-12 education.