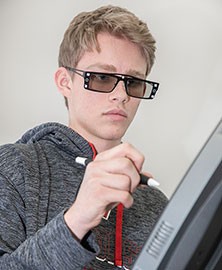 Nothing my instructors said was pointless – everything I learned was pretty useful to me. I could always take away a lot of real-world knowledge from what was being taught.

Architecture student readies for career and transfer to four-year college

Gateway Technical College graduate Jack Holtman’s college project  working with a local nonprofit group prepared him for his career by giving him the opportunity to apply his skills to a real-world situation.

At the same time, he was also able to help others in need and see a close-up view of the impact his work will have on others as he enters his career.

Jack graduated from the college’s Architectural-Structural Engineering Technician program and says he’s gained some great skills, in part, through a partnership with Habitat for Humanity. The group needed some very specific and new plans for a home to be built in Kenosha and turned to Gateway to help them out.

Jack’s home design was one of two from his class selected  by Habitat to be built in a Kenosha neighborhood. Before he even graduated college, Jack had already designed an actual house that will soon be constructed and lived in.

“I think this will help me to understand the overall picture,” says Jack. “When I designed it, I had to think about the fact that actual people would be using this house. I had to keep in mind that a family of five would be in there, try to design it so they each had enough space without feeling cramped.”

Jack says that’s been the core of his Gateway education: instructors helped students focus on how their coursework transfers to actual work in the field.

“Nothing my instructors said was pointless – everything I learned was pretty useful to me. I could always take away a lot of real-world knowledge from what was being taught.”

Jack says he’s learned much from the college and gained real-life skills in design that he can use in his career – and he can use those skills now. But Jack also wants to continue his education, and he was drawn to Gateway because of the transfer agreements it has forged with four-year colleges.

“Being able to earn my degree and transfer to a four-year college was a selling point for me for Gateway,” says Jack.

“When I heard about the 2-plus-2 agreement between Gateway and Concordia, I knew it was a great deal. I would earn a Gateway degree and then a four-year degree without racking up a lot of debt. I thought that was cool.”

Jack will continue his studies in construction project management.