Out the door with the desk 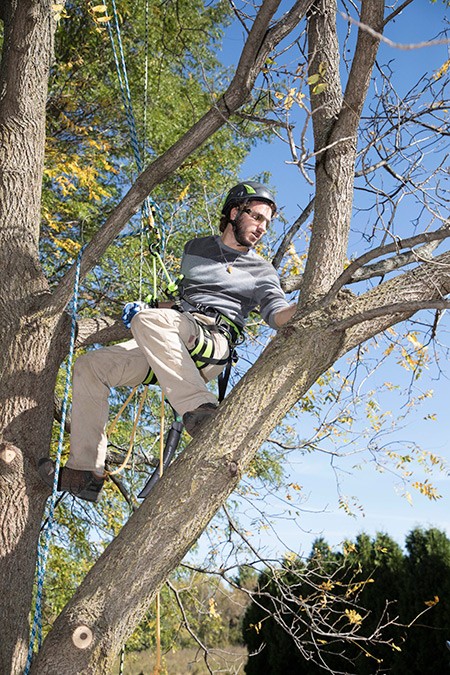 There’s no thoughts of sitting behind a desk for a career for Taylor Tschumper.

Being outdoors, in nature and working with his hands fits his career goals much better.

That’s why the Gateway Arboriculture/Urban Forestry program student likes what he’s doing so much – because there’s so much to like, he says.

“I like the fact that we’ve been outside and that much of what we’re doing is hands on. I can’t stress that enough – the program and career is very nature-oriented.

“On another level, it’s an incredible feeling to be working with something that can be twice your age.”

Taylor says Gateway is preparing him well for his career through a mixture of training in real-world situations as well as bringing in industry experts to offer advice and guidance.

“It’s incredible. We have had real-world work experience, our Gateway instructor is very knowledgeable and patient, and some big names from the industry have come in to work with us,” says Taylor.

Taylor and others from his class have already taken part in a collaborative effort with Kenosha County to fell and remove dead ash trees at Silver Lake Park. The work allowed them to apply what they learned during the course to perform work needing to be done at the park, which also benefited the community.

The variety of courses offered between campuses is a plus for students, Taylor says, as well as other opportunities to grow -- he is president of the newly formed Gateway Student Society of Arboriculture.

Taylor’s interest in outdoor work began during his conservation work with Americorps. He wanted to continue his education and came to Gateway.

“I went to Gateway for a semester and realized I didn’t want to be behind a desk for the rest of my life,” he says. “I wanted to be outside, working with my hands. I can do that with this program.”