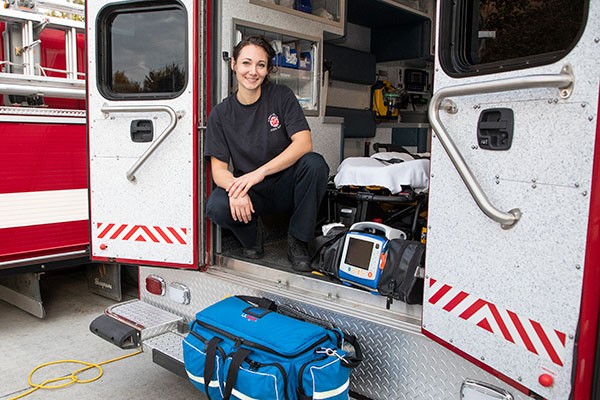 “When I received the scholarship, I was so grateful. It took the pressure off me – I wasn’t under the pressure of hound that wasn’t always lucrative, and paying bills and college tuition was hard. I viewed college as a luxury.”

Even though Raechel Liska viewed a college education as a “luxury,” it was something she was determined to attain.

Raechel worked full time as she worked toward her EMT Paramedic technical diploma but still needed an extra financial boost to help her with tuition. She applied to the Foundation – and was awarded two scholarships, the Joshua Dorval Memorial Scholarship and the Pierce Manufacturing HERO Center Scholarship.

She says the timing and financial benefits of the scholarships helped her to reach her goals.

“It was a relief. I was from a background that wasn’t always lucrative, and paying bills and college tuition was hard. I viewed college as a luxury.

“When I received the scholarship, I was so grateful. It took the pressure off me – I wasn’t under the pressure of how to come up with all the finances to pay for tuition. It allowed me to finish on time and be at a place where I could be successful.”

Raechel finished on time in Summer of 2018 and already landed a full-time position at an area fire station before she graduated.

Raechel says she believes there was a benefit to receiving the scholarship that went beyond pure finances. She says the scholarship bolstered her commitment to do well in her courses and career because of the support others had given her.

“The scholarship gave me a sense of appreciation that someone else recognized what I was doing,” she says. “Their willingness to help me meant a lot.”

Raechel also spoke about her parents’ willingness to help others, too, which connects with her current career.

“They put their lives on the line for others,” she said at a Foundation event in early 2018. “They were willing to sacrifice their lives, which also meant sacrificing family time to answer the call for people who needed their help.

“Through that, I realized we are all part of something much bigger than ourselves. I wanted to take part in that, and that’s why I am an EMT. It’s a beautiful thing.”

Raechel knew she wanted to do this full-time, though, which meant training and college.

“College is something I’ve always wanted to do, I wanted to go so badly. I didn’t always have the financial background to support those goals, so when the scholarships came in, it was breathtaking.”